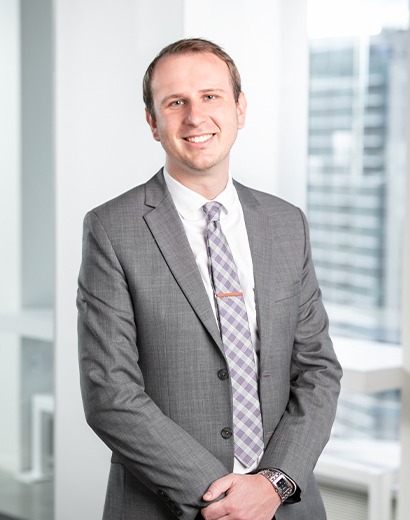 AJ joined our firm as an associate in 2020 after completing his articles with a regional law firm in Vancouver. He practices in the area of general insurance litigation and commercial litigation. He has appeared on behalf of clients in matters before the Provincial and Supreme Courts of British Columbia, as well as a variety of tribunals and boards. AJ prides himself in taking a client centric approach that creates practical and positive solutions.

Community engagement is an important part of AJ’s practice. During law school, he was a clinic head and board member of the Law Student Legal Advice Program, where he represented clients in immigration, refugee, criminal and employment matters. He has also worked with Law for Non-Profits, the Artist Legal Outreach, and Access Pro Bono.

Prior to becoming a lawyer, AJ worked as a brewer in the craft beer industry. This gives him insight to challenges and perspectives in the manufacturing and hospitability industries. AJ has also worked and studied in China and Singapore, which offers him an appreciation of Vancouver’s role in the Asia-Pacific Rim economy.

In his spare time, AJ enjoys backcountry skiing, biking, watching films, and taking the time to brew a few of his favourite beer recipes.

Called to the British Columbia Bar in 2020