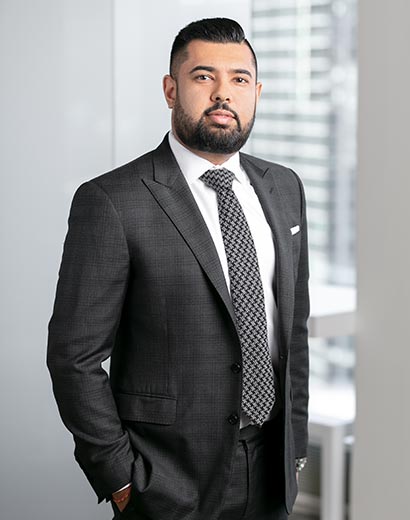 Krishan joined Whitelaw Twining as an associate in 2020, having previously worked at a firm in downtown Vancouver. Krishan’s primary practice area is general insurance defense, including both insurance coverage and subrogation.

Krishan achieved his Juris Doctorate at Western State University College of Law in Fullerton California in 2012. Thereafter, he was called to the California State Bar in 2013. Initially, Krishan began his career with a performance brake manufacturer based out of California as Special Advisory Counsel to General Counsel. Here, Krishan drafted and analyzed agreements, including distribution agreements, employment agreements and lease agreements. Krishan also advised General Counsel and Human Resources on employment issues as well as insurance issues. In 2014, Krishan worked for a boutique Worker’s Compensation Insurance Defense Firm and, within a year, was headhunted to the largest Worker’s Compensation Insurance Defence Firms in the United States. From 2015 through early 2019, Krishan worked with the some of the largest insurance carriers, employers, and third party administrators in the United States. Krishan was responsible for handling all aspects of a litigation file from inception through trial.

Krishan’s goal is to mitigate his clients’ risk and resolve matters as efficiently as possible. He will implore all avenues for resolution, including informal negotiations and formal mediation. However if an amicable resolution cannot be reached, Krishan will move forward with trial and vigorously defend his client’s interest to achieve the best results.

In his free time, you will find Krishan being active at the gym or playing basketball or soccer. He is also a big movie buff and a sports fan. He is a true Vancouverite and loves the Vancouver Canucks.

Called to the California State Bar in 2013

Member of the California State Bar