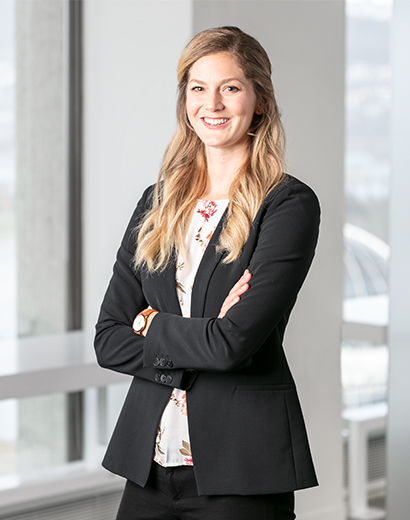 Elizabeth joined Whitelaw Twining as an articling student in 2014 and continued on as an associate at our firm. She is a versatile and dynamic lawyer, working in the areas of commercial litigation, construction and insurance. She is known for her progressive problem solving and her teams specialize in alternative dispute resolution methods.

Before entering law school, Elizabeth was a professional volleyball player. She was a member of the Canadian National Volleyball Team for six years and played in professional leagues in Germany, Finland and Denmark. Her background in sports has given her an edge in her law career—Elizabeth is calm and confident in adversarial environments and thrives in team settings.

Outside of the office, Elizabeth still plays a lot of beach volleyball and is also a coach. She also provides pro bono legal services to several non-profit sports organizations.

Called to the British Columbia Bar in 2016