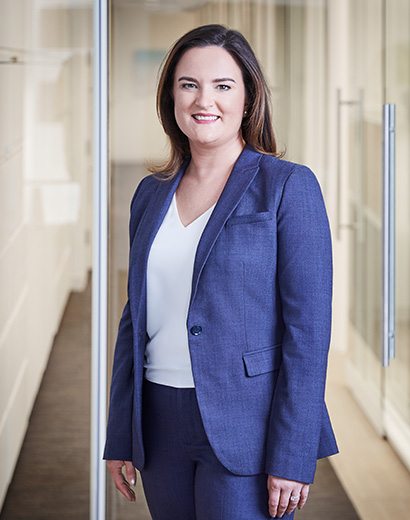 Lindsey has been with Whitelaw Twining since her call to the British Columbia Bar in 2007. In 2016, she moved to Calgary to open our firm’s office, and now enjoys an active practice in Alberta. Lindsey handles a broad range of insurance defence claims, with a particular focus on complex bodily injury and liquor liability matters. In addition to Alberta and British Columbia, she routinely handles litigated matters in Yukon Territory.

Lindsey has extensive experience in assessing and resolving claims involving allegations of chronic pain and psychological injuries. She is well-versed in resolving commercial general liability defence matters and insurance coverage disputes. She has represented clients before the Court of Appeal, and has served as counsel in abuse litigation, fatal accident claims and class action proceedings.

Lindsey enjoys advocating on behalf of her clients, regardless of how challenging the task is—and she is adamant about seeing matters through to a timely conclusion. Lindsey believes that working collaboratively with her clients to find solutions yields the best results. Her practice includes representing clients in mediation and judicial dispute resolution.

Outside of work, Lindsey is enjoying exploring her new surroundings in Alberta with her husband and dog.

Called to the British Columbia Bar in 2007

The Applicability of Section 10 of the Workers Compensation Act to Personal Injury and Fatal Accident Claims, September 2013

Implications of the BC Health Care Costs Recovery Act, September 2008